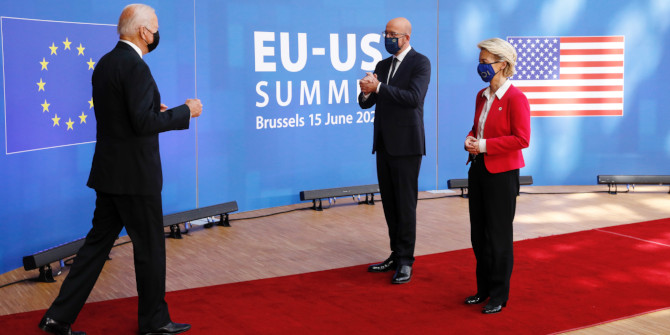 In his first address to the United Nations as US president on September 21, Joe Biden called for unity amid tensions between the United States and its European allies. But do these tensions signal the end of “the West”? Building on a new book, Jussi Hanhimaki asks if the roller coaster ride of the transatlantic relationship is in fact an indication of the strong ties between the West.

There is no hope. Wherever you look, it seems blatantly obvious that “the West” has been caught in a downward spiral. Take the state of NATO. The alliance is experiencing a serious identity crisis, provoked by internal quarrels and external circumstances. Questions about fair burden-sharing and defense spending have been accentuated by derogatory comments from leaders like former US President Donald Trump and his French counterpart Emmanuel Macron. The former has repeatedly called the alliance “obsolete”; the latter in 2019 referred to his “brain death”. Meanwhile, Russia’s annexation of Crimea in 2014 appears to have emboldened Vladimir Putin’s quest to expand Moscow’s influence.

Joe Biden’s mantra – “America is Back” – has apparently done little to reverse the West’s inevitable decline. On the contrary, NATO seems even more paralyzed. It has collectively accepted – in practice if not in politics – that post-Cold War enlargement has reached its geographic limits. Twenty years of military interventionism outside the zone (Iraq, Libya, Afghanistan) have yielded few positive results while sowing new tensions between the members of the alliance. The despicable exit from Afghanistan is the icing on this particular cake. The collective security pact that was the institutional embodiment of the post-war transatlantic partnership appears poised for retirement.

As NATO appears to be on the verge of collapse, the liberal international economic order is rapidly evolving. The rise of China and other rapidly changing economies looks set to knock the US down from its top spot and likely eclipse the European Union – no longer able to rely on the UK as part of the Single Market – in terms of GDP very soon. Meanwhile, Atlantic economic integration came to a halt as the Trump administration pursued an “America First” strategy and Britain left the EU.

Then there is the persistent presence of populism and nationalism on both sides of the Atlantic. Trump, as US president, was the most visible example. But his playbook was also noticeably similar to a number of political parties and movements across the transatlantic space from Italy to Finland, from the UK to Hungary. The rise of nationalism is undermining the work of multilateral institutions that symbolize the international system built and maintained through close transatlantic cooperation during and, in particular, after the Cold War.

Recent evidence, if any, of this disastrous state of transatlantic relations in the 21stst century was the sudden global spread of Covid-19. Rather than increasing transatlantic cooperation in the face of a common threat, the immediate reaction in Europe and the United States has been to close the borders and turn inward. In the fall of 2021, transnational cooperation – or working together through the World Health Organization – remains patchy at best.

Crises abound in the history of the transatlantic relationship. Yet the West endures. He’s unlikely to collapse anytime soon.

And even. Sad as it all sounds, the “West” is far from over. In a new book, Pax Transatlantic, I argue that below and beyond apocalyptic rhetoric, the transatlantic space is more integrated today than at any time in the past. The post-Cold War era was filled with disagreements and transatlantic crises. But it was also a time of enlargement, deep economic ties and shared political tendencies.

Consider the history of NATO. In 2021, its membership has almost tripled from the first twelve of 1949. Most of this growth has taken place since 1990 (with North Macedonia joining in 2020 as 30e Member state). The key to NATO’s longevity and growth? It is in part the adaptability of the alliance to the evolution of the international situation. But ultimately it is the feeling that in the third decade of the 21st century, NATO member states remain concerned with similar, if not identical, security challenges.

Admittedly, the recent takeover of Afghanistan by the Taliban is likely to reduce appetite for “out of area” operations. But that did nothing to change the basic reality: (most) Europeans feel more secure thanks to NATO, while the United States sees the alliance as an anchor of their great overall strategy. Concerns about Russian actions and growing Chinese influence ensure the continuation of transatlantic security interdependence.

Then there is the transatlantic economy. The great economic history of the post-Cold War era has been the relentless rise of the People’s Republic of China (PRC). The United States and the European Union (EU) buy more manufactured goods in the PRC than anywhere else. But that’s only part of the story. Despite numerous disputes over the unfair trade practices and the rise of economic nationalism that have blocked the Atlantic integration process, the North Atlantic area has the richest and most closely connected transcontinental economy in the world.

The United States and Europe are each other’s major merchandise export markets. Global transatlantic trade in services goes well beyond the limited role of the PRC. More importantly, there are massive investment flows between North America and Europe which, even as negotiations to create a Transatlantic Trade and Investment Partnership (TTIP) came to a halt in 2016, continued unabated.

Finally, let us consider the parallel evolution of domestic policy in the transatlantic space. Notably, much has been said and written about the threat that populism poses to the future of the West. The double shock of Brexit and the election of Donald Trump in 2016 sparked a virtual tsunami of pessimistic predictions from a divided and diminished West.

Yet even in the realm of democratic politics, one can find evidence of an ever closer integration of the North Atlantic region. The populism of the 2010s is not the only example of the parallel evolution of domestic politics on both sides of the Atlantic. The rise and fall of the so-called “third way” in the 1990s and early 2000s was a first indication of the tight integration of the post-Cold War transatlantic political space. More recently, the pullback against populism has become a transatlantic phenomenon that is gaining momentum due to “denial” of Covid-19 and reluctance to vaccinate.

Crises abound in the history of the transatlantic relationship. Yet the West endures. He’s unlikely to collapse anytime soon.

Note: This article gives the author’s point of view, not the position of EUROPP – European Politics and Policy or the London School of Economics. Featured image credit: European Council

Could the Angels have Shohei Ohtani pitching more often in 2022? – Orange County Register