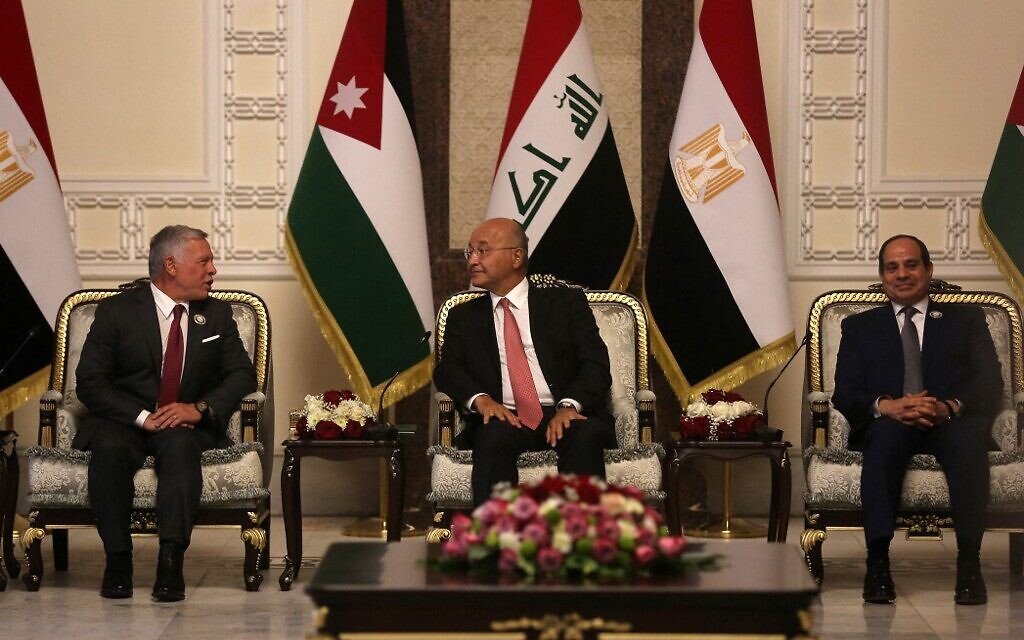 BAGHDAD, Iraq – Egypt, Jordan and Iraq agreed to boost security and economic cooperation at a tripartite summit on Sunday that saw an Egyptian head of state visit Iraq for the first time in three decades.

Iraq is also seeking to establish itself as a mediator between Arab countries and Iran, after apparently hosting talks in April between Tehran and Riyadh.

“Iraq’s takeover paves the way for an integrated system for our region based on the fight against extremism, respect for sovereignty and economic partnership,” Saleh said on Twitter.

The summit held between Kadhemi and his guests addressed regional issues, as well as ways to strengthen cooperation between Iraq, Jordan and Egypt in the areas of security, energy and trade, according to a joint statement released at the end of the meeting.

The leaders discussed a “political solution” to the 10-year civil war in Syria on the basis of UN resolutions “which would preserve its security and stability and provide adequate conditions for the return of refugees.”

The conflict in Syria has claimed hundreds of thousands of lives and displaced millions of people, with refugees flooding the borders of neighboring countries, including Jordan, which lacks resources and faces economic hardship.

The leaders commended the ongoing efforts to restore stability in Libya and Yemen, and called for the departure of foreign forces and mercenaries from Libya.

They called for redoubled efforts to achieve a “just and comprehensive peace” between Israel and the Palestinians, and for the establishment of an independent Palestinian state.

They also praised Egypt’s role in negotiating an end to deadly hostilities between Israel and the Gaza Strip terror leaders, Hamas, in May, and Cairo’s pledge to help rebuild the enclave. coastal.

Kadhemi set the tone at the start of the summit, saying the three countries “will try to shape a common vision … through cooperation and coordination” regarding Syria, Libya, Yemen and Israel. 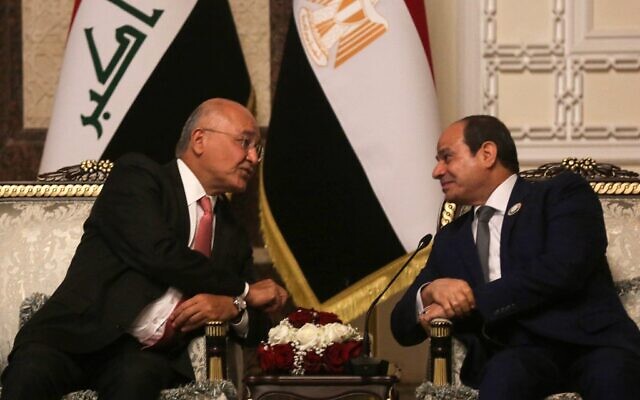 Relations between Baghdad and Cairo have improved in recent years, and officials from both countries have paid visits.

The King of Jordan visited in early 2019 for the first time in 10 years.

The media revealed that Iranian and Saudi officials met in Baghdad in April, their first high-level meeting since Riyadh severed diplomatic ties with Tehran in 2016.

Iraqi analyst Ihsan al-Shamari said Sunday’s summit was “a message to the United States that Iraq will not only have relations with Iran at the expense of Arab countries.”

In a statement, US State Department spokesman Ned Price said Washington welcomed the “historic” visit and called it “an important step in strengthening regional economic and security ties. between Egypt, Iraq and Jordan and to advance regional stability ”.

Analysts have long said Iraq is a battleground for influence between arch enemies Washington and Tehran with whom it enjoys good relations.

I am proud to work at The Times of Israel

I’ll tell you the truth: life here in Israel is not always easy. But it is full of beauty and meaning.

I am proud to work at The Times of Israel alongside colleagues who put all their hearts into their work day in and day out, to capture the complexity of this extraordinary place.

I believe our reporting sets an important tone of honesty and decency which is essential for understanding what is really going on in Israel. It takes a lot of time, commitment and hard work on the part of our team to achieve this.

Your support, by joining The Times of Israel community, allows us to continue our work. Would you like to join our community today?

Join the Times of Israel community Join our community Already a member? Log in to no longer see this

Are you serious. We appreciate this!

We are really glad you read X Times of Israel Articles in the past month.

That’s why we come to work every day – to provide discerning readers like you with must-see coverage of Israel and the Jewish world.

So now we have a request. Unlike other media, we have not set up a paywall. But since the journalism we do is expensive, we invite readers for whom The Times of Israel has become important to help support our work by joining The Times of Israel community.

For as little as $ 6 per month, you can help support our quality journalism while benefiting from The Times of Israel WITHOUT ADVERTISING, as well as access to exclusive content reserved for members of the Times of Israel community.

At home in Scranton, facing a fight in Washington, Biden presents his sprawling…